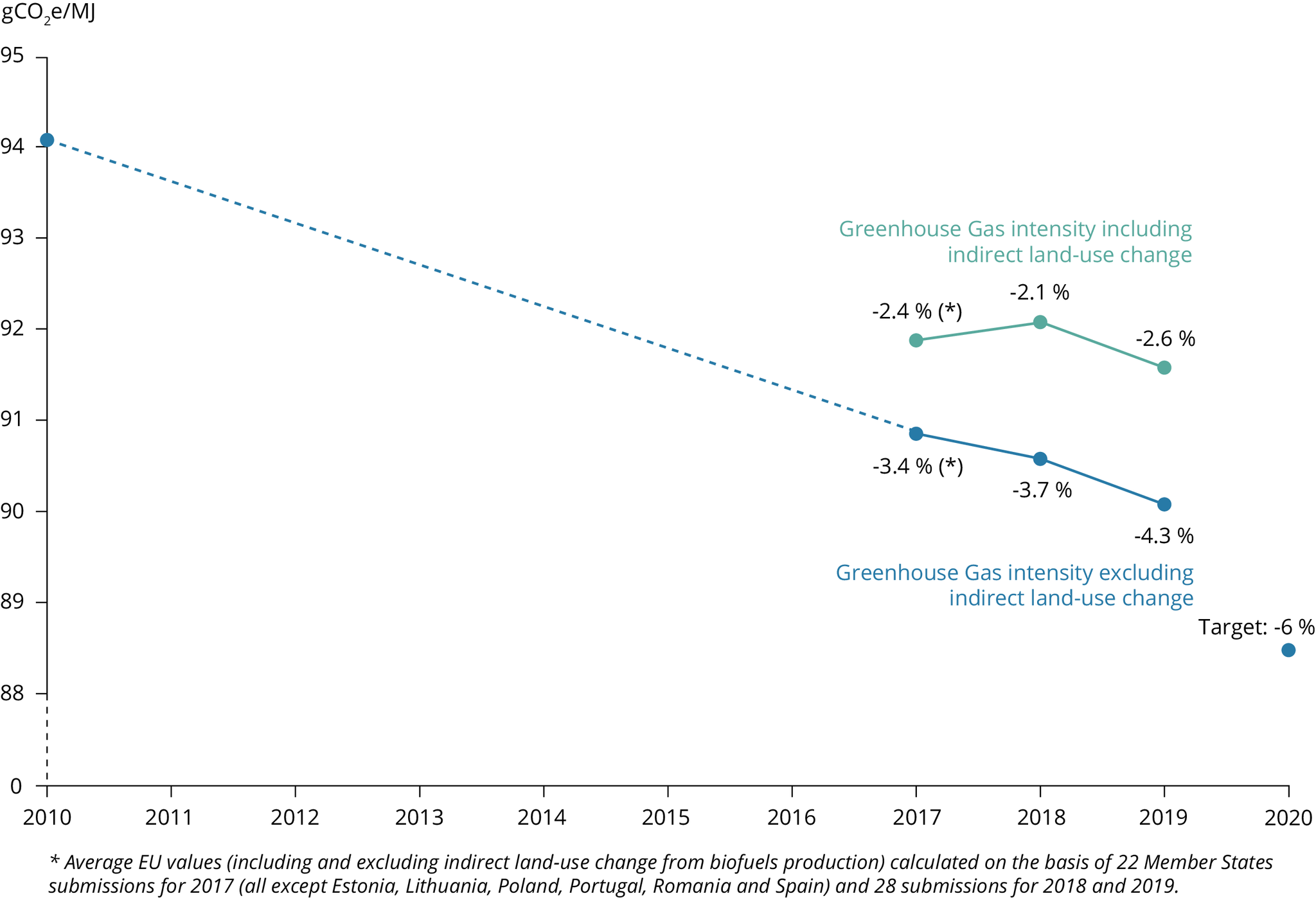 Transport is responsible for more than 25 % of the EU’s greenhouse gas (GHG) emissions and a major contributor to climate change. Cutting emissions from transport is pivotal to achieving the EU target of becoming climate neutral by 2050.

Biofuel use has contributed to a reduction in the GHG emission intensity of road transport in the EU. However, it is important to ensure that rising demand for biofuels does not have a negative impact on land use by displacing the production of food and feed crops and driving the conversion of land — such as forests and wetlands — to agricultural land, leading indirectly to increased GHG emissions. This phenomenon is known as indirect land us change (ILUC). The FQD requires that Member States identify the feedstock from which their biofuels originate and estimate emissions resulting from ILUC for certain feedstocks.

However, emissions from ILUC are not considered for assessing compliance with the 6% 2020 reduction target. If ILUC is taken into account, the average GHG emission intensity of fuels consumed in 2019 is only 2.6% lower than in 2010; it decreased between 2018 and 2019 because of the decreased use of oils crops substituted by sugars.

Progress towards meeting the 6% reduction target by 2020 varies widely across Member States. In 2019, Finland and Sweden had exceeded this target and the Netherlands was close to reaching it (5.8% reduction). This is because their road transport fuel mixes have relatively high proportions of biofuels (9% in Finland, 7% in the Netherlands and 22% in Sweden) and, on average, the biofuels used have relatively low emission intensities (10.4 g CO2e/MJ, 15.2 g CO2e/MJ and 14.1 g CO2e/MJ, respectively).

EU Member States report annually on the volumes, energy content and life cycle GHG emissions of fuels used in road transport and non-road mobile machinery, in line with their obligations under the Fuel Quality Directive 98/70/EC (FQD) Article 7a. Standards relevant to this reporting requirement are inter alia:

This indicator summarises the information reported by the EU Member States — and subsequently collected, checked and compiled by the European Environment Agency together with the European Topic Centre on Climate Change Mitigation and Energy (ETC/CME) — on the volume, energy consumption and GHG intensity of fossil fuels and biofuels.

The EEA and ETC/CME support the European Commission in the compilation, quality checking and dissemination of information reported under Article 7a of the FQD. Details on the reporting obligation can be found in the EEA's Reporting Obligation Database and Central Data Repository.

Policy relevance: Transport consumes one third of all final energy in the EU. The bulk of this energy comes from oil. This means that transport is responsible for a large share of the EU’s greenhouse gas emissions and is a major contributor to climate change. While most other economic sectors, such as power production and industry, have reduced their emissions since 1990, those from transport have risen. They now account for more than one quarter of the EU’s total greenhouse gas emissions. A reversal of this trend is currently not in sight. That makes the transport sector a major obstacle to realising the EU’s climate protection goals.

EU strategy documents focus on decarbonising transport. The European Commission’s 2018 strategy, ‘A clean planet for all: A European strategic long-term vision for a prosperous, modern, competitive and climate neutral economy’, seeks to chart the course for a transition towards ‘net-zero’ greenhouse gas emissions across the EU by 2050. For transport, it underlines the need for a system-based approach, stresses the importance of switching to low-carbon modes and zero-emission vehicles, underlines the central role of electrification and renewable energy sources, and pushes for operational efficiency improvements.

Similarly, from 2016, the ‘European strategy for low-emission mobility’ has identified a more efficient transport system, the rapid deployment of low-emission fuels and the transition towards low- and zero-emission vehicles as priority areas for action (EEA, 2020).

In the context of these policies, the FQD (together with the Renewable Energy Directive) shall ensure that fuels from renewable sources such as crops and oils do not have negative impacts on land use, e.g. converting pasture or agricultural land previously destined for food and feed markets to biofuel production, while at the same time reducing the lifecycle greenhouse intensity of road fuels through the inclusion of biofuels.

Environmental relevance: The blending of biofuels is one of the methods available for fossil fuel suppliers to reduce the greenhouse gas intensity of the fossil fuels supplied. Where pasture or agricultural land previously destined for food and feed markets is diverted to biofuel production, the non-fuel demand will still need to be satisfied either through intensification of current production or by bringing non-agricultural land into production elsewhere. The latter case constitutes indirect land-use change and, when it involves the conversion of land with high carbon stock, it can lead to significant greenhouse gas emissions (Directive (EU) 2015/1513). The FQD includes provisions to address the impacts of indirect land-use change while monitoring to what extend the share of biofuels in road transport fuels is increasing.

No methodology uncertainty has been specified.

No data set uncertainty has been specified.

No rationale uncertainty has been specified.