Waste generation and decoupling in Europe 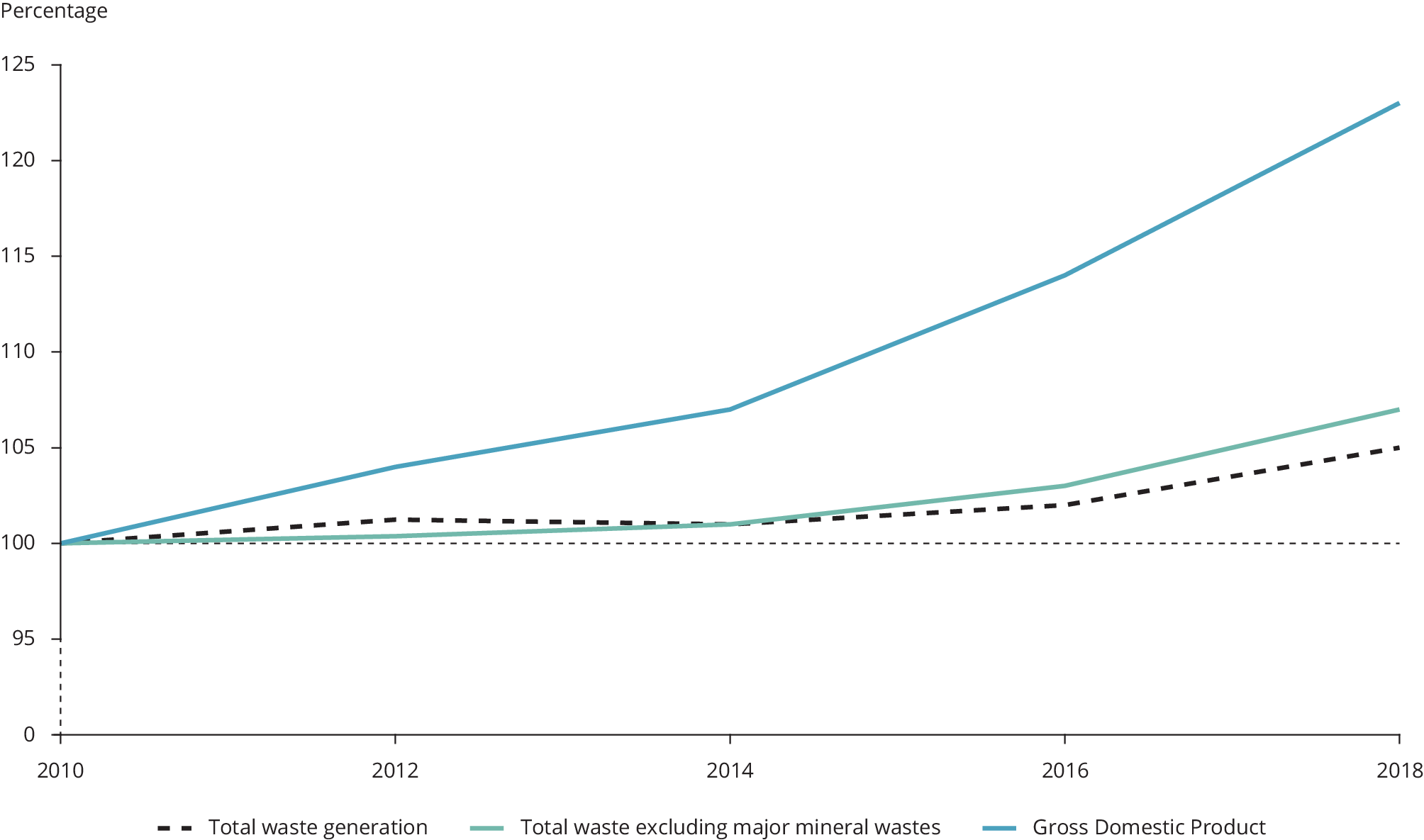 Waste generation is increasing in the EU. Reducing this, and achieving the absolute decoupling of waste generation from economic growth, is a primary objective of EU waste and circular economy policies. The EU Waste Framework Directivesets out a waste hierarchy, the guiding principle of EU and national waste policies.

From 2010 to 2018, total waste generation increased by 5.0% (114 million tonnes) in the 27 EU Member States (EU-27). Major mineral wastes, such as hard rocks, concrete, soils and others (that are mainly produced in the mining and construction sectors) feature in big quantities in relation to other waste types. This alters the interpretation of trends. They also usually represent an environmental issue of relatively less concern. If we exclude them from the totals, the remaining waste streams, more environmentally significant, increased even more, by 7.0% (50.3 million tonnes). 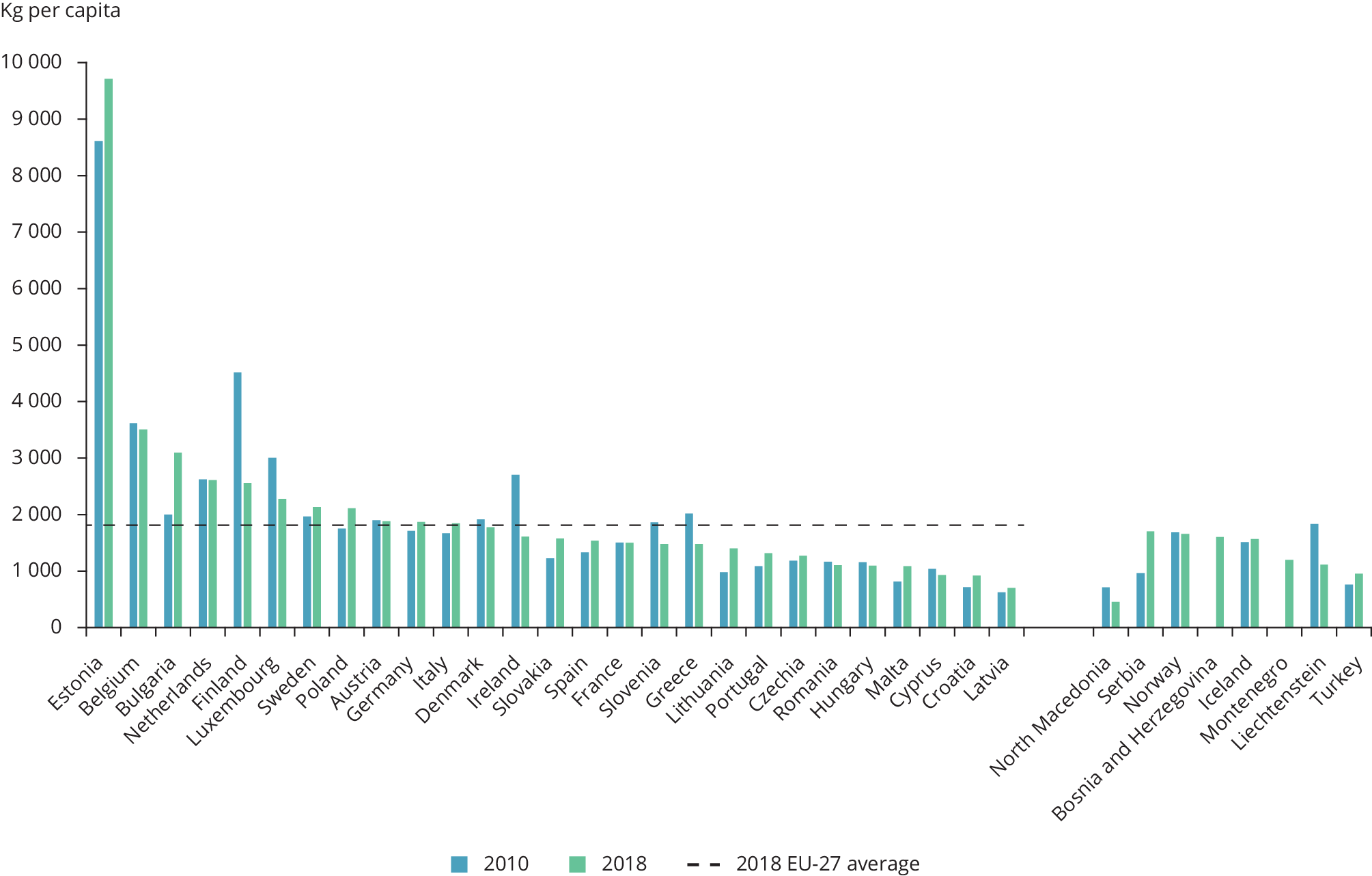 On average, 1.8 tonnes of total waste (excluding major mineral wastes) were generated per European citizen, up from 1.7 tonnes/capita in 2010. This average masks large country differences, both in absolute waste volumes per capita and in the waste generation trend.

Amounts generated ranged from less than 1 tonne per capita to 9.7 tonnes per capita in 2018. The large quantity of waste generated in Estonia is related to energy production based on oil shale (Eurostat, 2019a), while waste data for North Macedonia show a high degree of fluctuation over time. These differences partly reflect differences in the structures of countries’ economies, and extreme values or significant differences can be explained by specific situations in individual countries.

Trends over time also show a mixed picture: total waste (excluding major mineral wastes) generated per capita increased between 2010 and 2018 in 18 countries and decreased in 15 countries. In some cases, trends have been influenced by improvements in data quality over time.

Figure 1: raw data for waste generation (total and excluding major mineral wastes) and GDP were retrieved from Eurostat. Eurostat aggregate data for the EU-27 were used. Data on waste generation contain all NACE (statistical classification of economic activities in the European Community) activities and households. Frequency of data publishing varies from every 2 years (for waste generation) to every year (for GDP). The aggregated figures are indexed to 2010, which means that the figure for each year is divided by the figure for 2010 and then multiplied by 100. No gap filling was applied to the data. Information on data set uncertainties can be found directly in the metadata and explanatory notes provided by Eurostat. Only official Eurostat data sets have been used.

Figure 2: data for waste generation, excluding major mineral wastes, were retrieved from Eurostat. Data are displayed at country level, contain all NACE activities and households and are expressed in kg per capita. To provide the broadest possible picture of European countries, geographical coverage was extended to the 32 EEA member countries and the Western Balkan cooperating countries. The frequency of data publishing is every 2 years. No gap filling was applied to the data. Information on data set uncertainties can be found directly in the metadata and explanatory notes provided by Eurostat. Only official Eurostat data sets have been used.

No rationale has been identified for this indicator.

One of the characteristics of the linear economy system, which has predominated in recent decades, is a high level of resource consumption followed by a high level of waste generation (‘take-make-dispose’ model). This economic model is based on increasing profits generated by the consumption of primary resources and increasing demand for short-cycle products. In 2015, 2018 and 2020, the European Commission adopted circular economy packages to make the transition to a circular economy model, according to which resources should be used in a more sustainable way. The waste hierarchy serves to set priorities for EU and national waste policies and gives the highest priority to waste prevention, followed by preparing for reuse, recycling, other methods of recovery and disposal. These priorities are highlighted by recent waste and resource efficiency policies and strategies at EU and national levels.