Ocean surface pH declined from 8.2 to below 8.1 over the industrial era as a result of an increase in atmospheric CO2 concentrations. This decline corresponds to an increase in oceanic acidity of about 30%. Reductions in surface water pH are observed across the global ocean. Ocean acidification has impacts on marine organisms and has already affected the deep ocean, particularly at high latitudes. Models project further ocean acidification worldwide. The target under United Nations Sustainable Development Goal 14.3 is to minimise the impacts of this by 2030. 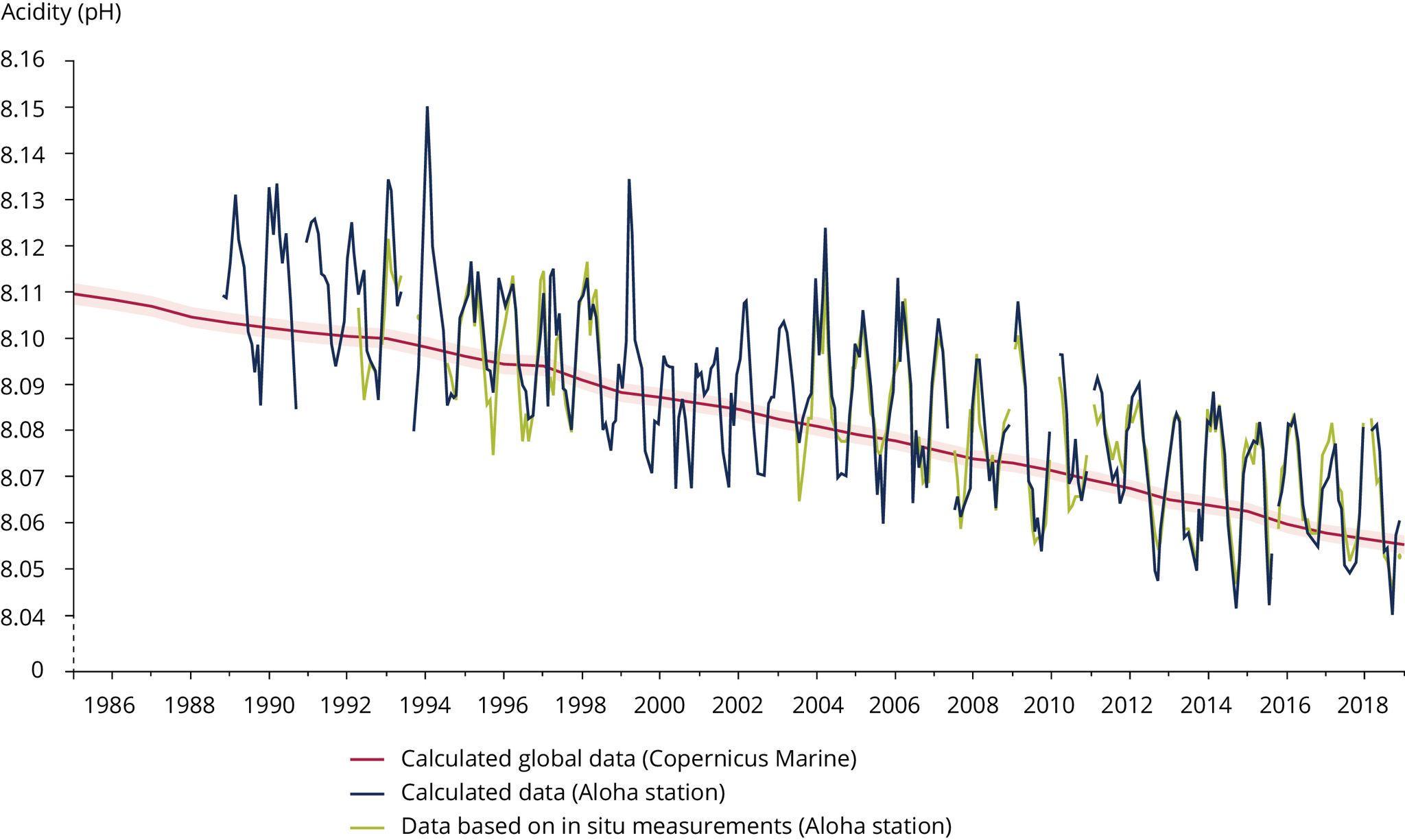 Over the last million years, average surface seawater pH has been relatively stable, oscillating between 8.3, during cold periods (e.g. during the last glacial maximum 20,000 years ago), and 8.2, during warm periods (e.g. just prior to the industrial revolution). Rapid increases in atmospheric CO2 levels due to emissions from human activities are now threatening this stability, as emitted CO2 is partially absorbed by the ocean, causing a decline in pH and ocean acidification. A goal of the 2030 Agenda for Sustainable Development is to address the impacts of this.

The global annual mean atmospheric CO2 concentration exceeded 400 ppm in 2016, which is more than 40% above the pre-industrial level (280 ppm); half of that increase has occurred since the 1980s. Over the same period, ocean pH decreased from 8.11 to below 8.06, corresponding to an approximately 30% increase in acidity. This decrease in pH occurred at a rate about 100 times faster than any change in acidity experienced during the past 55 million years.

This indicator looks at the longest time series of measured pH values available, from the Aloha station, offshore of Hawaii, and also calculated data on global average surface ocean pH from the Copernicus Marine Environment Monitoring Service (CMEMS). The reduction in pH measured in surface mixed-layer depths (up to 100 m) is consistent with that calculated from atmospheric CO2 concentrations, assuming thermodynamic equilibrium between the ocean surface and atmosphere. The northernmost seas, i.e. the Norwegian and Greenland Seas, have seen significantly larger decreases in pH than the global average.

Average surface open ocean pH is projected to decline further, with the largest projected decline representing more than a doubling in acidity. This will affect many marine organisms and could alter marine ecosystems and fisheries. Such rapid chemical changes are an added pressure on marine calcifiers and Europe’s sea ecosystems.

Without substantial reductions in CO2 emissions, it will take thousands of years for the Earth system to re-establish balanced ocean chemical conditions and recover from human-induced acidification, and millions of years for coral reefs to return, based on records of natural coral reef extinction events.

This indicator illustrates the global mean average rate of ocean acidification, quantified by decreases in pH, which is a measure of acidity, defined as the hydrogen ion concentration. A decrease in pH value corresponds to an increase in acidity.

The observed decrease in ocean pH resulting from increasing concentrations of CO2 is an important indicator of change in the global ocean and the impacts of climate change.

This indicator provides information on:

On 4 March 2020, the European Commission proposed a European climate law to ensure a climate-neutral European Union by 2050 as a part of the European Green Deal. This law is designed to establish a basis for adaptable management, with focus on the implementation of mitigation measures, the monitoring of progress and the improvement of management approaches if needed.

No methodology uncertainty has been specified.

No data set uncertainty has been specified.

No rationale uncertainty has been specified.

Acidity is measured in pH.