Emissions and energy use in large combustion plants in Europe

Between 2004 and 2019, emissions from large combustion plants in the EU decreased: SO2 by 89%, nitrogen oxides by 60% and dust by 88%. Declines in emissions and improvements in environmental performance were largely driven by European policy, which sets legally binding emission limit values. The amount of fossil fuels used decreased by 23%, as energy production shifts to climate-friendly sources. Stricter emission limit values and policies aimed at increasing the use of renewable or cleaner fuels are expected to drive further declines in combustion plant emissions in coming years.

Large combustion plants (LCPs) are responsible for around 40% of the EU’s electricity production capacity. These largely depend on fossil fuels, resulting in the emission of pollutants to air, water and land, with damaging effects on ecosystems. To mitigate the environmental impact, EU policy aims to reduce LCP emissions.

Emissions form LCPs have decreased significantly over the period 2004-2019, emissions of SO2 by 89%, NOx by 60% and PM10 by 88%. This happened throughout the period, but two main turning points are apparent. The first one, over the period 2007-2009, LCP operators had the double effect of new emission limit values from the LCP Directive and the financial crisis that started at the end of 2008. The second turning point, around 2015-2016, coincided with the moment when operators had to comply with stricter limits as provided by the Industrial Emissions Directive (IED), which entered fully into force that year.

LCPs vary significantly in size, from 50 MWt to even larger than 2000 MWt. Declines in emissions correspond to a significant improvement in environmental performance across all LCP sizes, particularly among the very large ones, which, although including only 21% of LCPs, accounts for 70% of installed capacity.

In 2019, 4,623 LCPs, were covered by the scope of the IED. European countries rely to different degrees on combustion plants to meet their energy demands. However, generally, the number of plants in a given country is proportional to its size and population.

The fuel mix plays a key role in emission generation, with coal and liquid fuels substantially dirtier than other options. Shifting from fossil fuels to other energy carriers and sources is also paramount to achieving climate mitigation goals. Changes to the fuel mix have also contributed to emission reductions over the period, along with other factors, including broader economic and societal changes, changes to international fuel prices and industry initiatives. However, coal continues to be predominant and natural gas, a fossil fuel, is also very significant in the overall mix (bottom-right graph, Figure 1). Further emission reductions are expected in the coming years as a result of new, stricter IED permits, and energy and climate change mitigation policies, driving the use of renewable or cleaner fuels and aimed at achieving the EU’s ambition of becoming climate neutral by 2050. 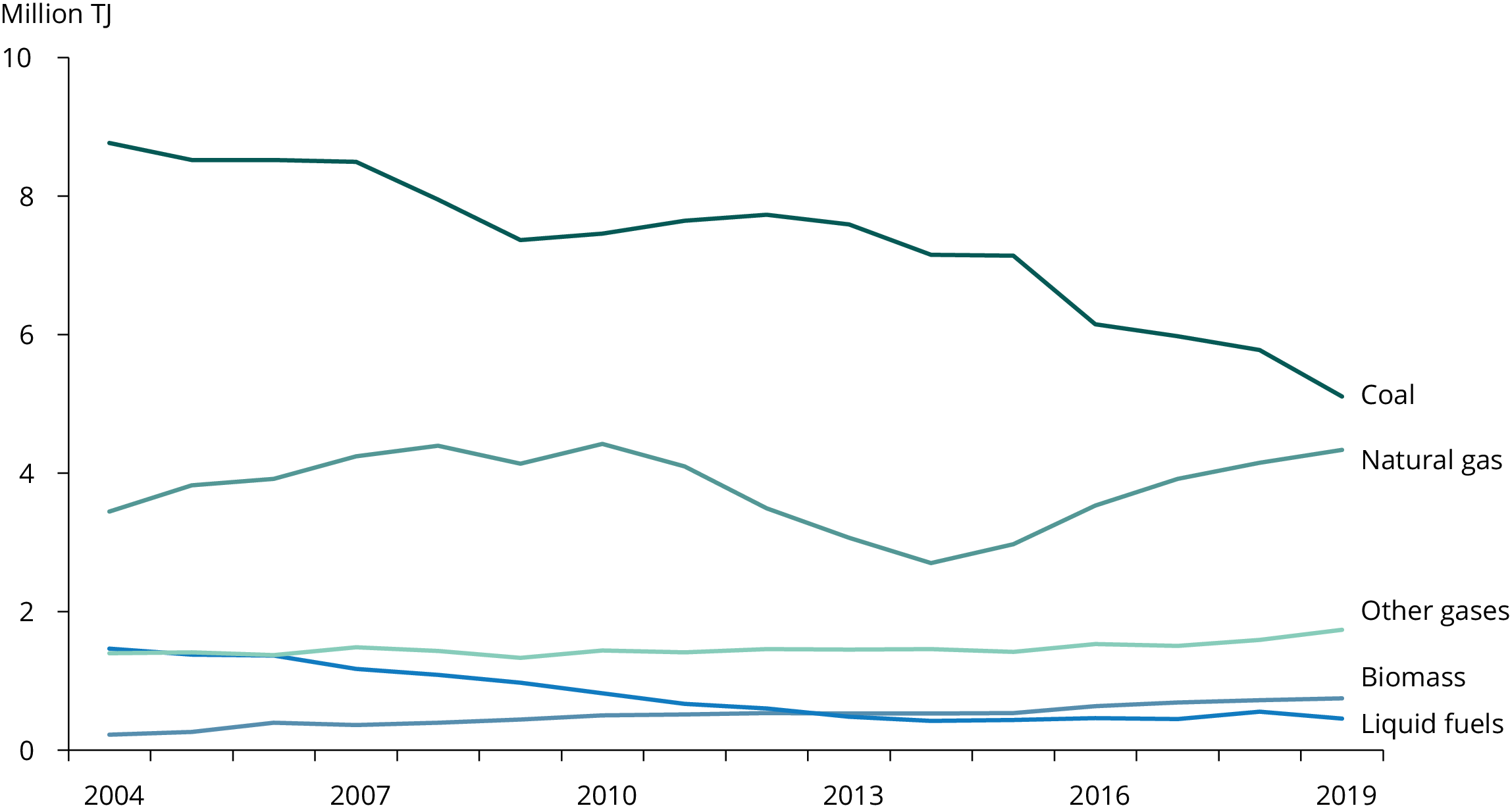 Overall, LCP fuel consumption decreased by 19% between 2004 and 2019 (Figure 2). The majority of this decrease occurred after 2010 and can be largely attributed to a decrease in the consumption of fossil fuels (by 23% since 2004), particularly coal (by 31% since 2010) and liquid fuels (by 44% since 2010). This could reflect a shift in Europe’s energy system from fossil fuels to renewable sources, with natural gas still playing a bridging role in this transition. However, coal consumption remains the largest contributor to total LCP fuel consumption, followed by natural gas. Achieving the goals set by the European Green Deal will imply a much faster abandoning of fossil fuels so the trends must accelerate in the coming years.

Almost all EU countries have reduced or stabilised coal use over the period, with eight countries contributing the most to the reduction of coal consumption (Figure 2). Germany and Spain, which in turn, are those that reduced their use the most, account for half of the reduction at European scale. Another interesting phenomenon is the consistent increase in biomass as a fuel input. While this has its origin in climate mitigation goals, it can result in increases in air pollution, particularly particulate matter and volatile organic compounds (EEA, 2019b).

This indicator tracks trends for the so-called Large Combustion Plants' (LCPs) emissions of SO2, NOx and dust, as well as the evolution of the energy mix used in these plants since 2004. LCPs comprise industrial combustion plants with a total rated thermal input equal to or greater than 50 MW.

The temporal coverage is 2004-2019. Data for the period 2004-2015 were reported under Directive 2001/80/EC on large combustion plants, while for 2016 onwards they were reported under Directive 2010/75/EU on industrial emissions. The requirements are not identical, and it is expected for data from 2016 onwards to have a slightly broader scope in terms of plants included.

Fig. 1: Emissions are indexed with reference to 2004 levels. The exact formula is: emissions of pollutant x for the current year/emissions for pollutant x in 2004) × 100.

Fig. 2: Total fuel consumptions per type are summed and provided in the graph. As the data were not reported in the same way before and after 2016, the category 'coal' is the result of the sum of all solid fuels reported.

No gap filling was performed.

No rationale has been identified for this indicator.

Anthropogenic emissions of SO2, NOx and dust all contribute to air quality problems in Europe. Excess deposition of sulphur and nitrogen compounds can lead to disturbances in the functioning and structure of ecosystems by, for example, causing the acidification of soils and waters as well as, in the case of nitrogen, the eutrophication of nutrient-poor ecosystems such as grasslands.

LCPs use large amounts of fuels, mostly fossil fuels, to produce useful forms of energy. These plants inevitably generate a number of residues, waste products and emissions to all environmental media (air, water and soil). Emissions from LCPs constitute a significant proportion of total anthropogenic emissions and are considered one of the main environmental pressures from LCPs.

In that context, policy has regulated these plants for decades now. Between 2004 and 2015, two pieces of EU law were in place: the LCP Directive and the IPPC Directive. This EU legislation imposed specific limit values on emissions of NOx, SO2 and dust from plants with a thermal rated input equal to or greater than 50 MW. Since 1 January 2016, this legislation has been replaced by the IED.

This indicator covers the EU-27 countries. However, there are no data for Croatia for 2004-2009. The data for Croatia have not been gap filled, and in the years of reporting Croatia contributed less than 1% of emissions and fuel consumption to the EU-27 total. This lack of data is thus considered a minor distortion of the overall trend.

As indicated, reporting requirements were not identical before and after 2016, which is also considered a minor distortion of the trend.

Although reporting requirements began in 2004, it is possible that the data for the first reported period (2004-2006) contain some gaps.