The area and number of terrestrial protected areas in Europe have grown steadily over time, with the biggest increases in recent decades. In 2020, protected areas covered 26 % of EU land, with 18 % designated as Natura 2000 sites and 8 % as other national designations. In the EEA-38 countries plus the United Kingdom, this coverage is lower and amounts to 23 %.

Figure 1. Increase in the number and cumulative area of nationally designated terrestrial protected areas in Europe, 1800-2020 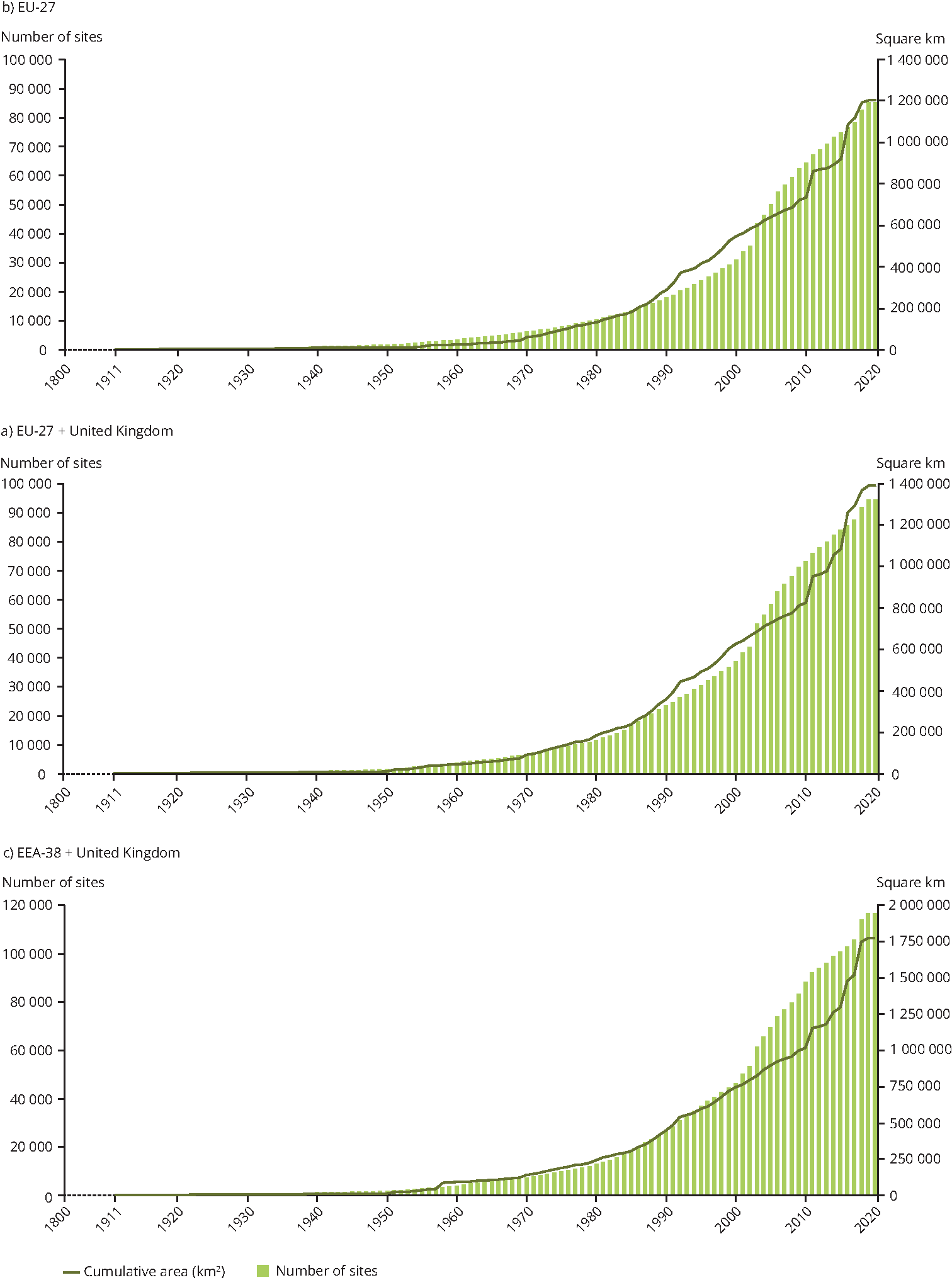 Protected areas benefit species, ecosystems and the environment overall. They provide significant economic and societal benefits, including employment opportunities. In particular, they contribute to people’s health and well-being and have significant cultural value.

The two most important European networks of protected areas are Natura 2000 in the EU Member States and the Emerald Network, outside the EU, established under the Bern Convention. For more information about the Natura 2000 network, see SEBI 008 indicator: Natura 2000 sites designated under the EU Habitats and Birds Directives.

A 'nationally designated protected area' is an area protected by a national legislation. If a country has included sites designated under international agreements such as the EU Birds and Habitats Directives, or the Bern or Ramsar Convention in its legislation, the corresponding protected sites, such as the Natura 2000, Emerald or Ramsar sites, of this country are included in the indicator.

As shown in Figure 1, the growth in nationally designated protected areas in Europe has been exponential. Currently, 26 % of EU land is protected, with 18 % of this area designated as Natura 2000 sites and 8 % as other national designations, on almost 100 000 sites in total (data for the EU-27 Member States). In the EEA-38 countries plus the United Kingdom, this coverage is lower and amounts to 23 %, with about 170 000 sites.

Europe's protected areas are highly diverse in character, varying in size, aim and management approach. They are large in number but relatively small in size.  This reflects the high pressure on land use, arising from agriculture, transport and urban development. Large-scale nature reserves occur mostly in countries with low population densities, such as Finland, Iceland, Norway and Sweden.

Further expansion of terrestrial protected areas will be needed to achieve the target of legally protecting a minimum of 30 % of EU land set in the EU biodiversity strategy for 2030. Designation of protected areas is not in itself a guarantee of biodiversity protection. Management of the sites is a decisive factor in achieving the conservation aims; however, we currently lack comprehensive information on how effectively these sites are managed. Moreover, protected areas can no longer be perceived and managed as isolated units, but need to be understood as part of a wider network with ecological corridors to prevent genetic isolation, allow for species migration, and maintain and enhance healthy ecosystems. An ecologically coherent network requires both spatial and functional connectivity within countries and across borders, aided, among others, by investments in green infrastructure.

Figure 2. Share of country designated as terrestrial protected area and the overlap between Natura 2000 or Emerald sites and national designations

There are different patterns among countries and the differences in approaches reflect the diversity of historical, geographical, administrative, political and cultural circumstances. In establishing Natura 2000 sites, countries also have the flexibility to introduce new designation procedures, adapt existing ones or underpin designations by other legal acts. Some Natura 2000 sites nearly always overlap with nationally designated sites. This is particularly visible in Estonia, Latvia and the Netherlands and to a somewhat lesser extent in Finland, Lithuania and Sweden. Countries that joined the EU most recently — Bulgaria, Croatia and Romania — have extended their protected areas very significantly by creating Natura 2000 sites, and in the past a similar process took place in Greece, Hungary, Ireland, Portugal and Slovakia. In other countries, there is moderate or little overlap, as in Denmark, France and Germany.

Outside the EU, the Emerald network is still at the early stages within the EEA-38 countries. Norway and Switzerland are two countries that have officially adopted Emerald sites on their territories. Switzerland has a moderate overlap of Emerald sites, while in Norway the overlap is large.

The indicator illustrates the rate of growth in the number and cumulative area of nationally designated terrestrial protected areas over time. It also shows the overlap between the international protected areas networks such as Natura 2000 or the Emerald Network and national designations.

A 'nationally designated protected area' is an area protected by a national legislation. If a country has included sites designated under international agreements, such as the EU Birds and Habitats Directives, or the Bern or Ramsar Convention in its legislation, the corresponding protected sites, such as the Natura 2000, Emerald or Ramsar sites, of this country are included in the indicator.

The data for the nationally designated protected areas inventory (CDDA) are delivered by the Eionet partnership countries as spatial and tabular information. The inventory began in 1995 under the CORINE programme of the European Commission. The CDDA is now an agreed annual Eionet core data flow maintained by the European Environment Agency (EEA) with support from the European Topic Centre on Biological Diversity (ETC/BD). The dataset is used by the EEA and, among others, the UNEP-WCMC for their main European and global assessments, products and services.

The Reporting guidelines with full details on the methodology are available from the CDDA reference page.

Comprehensive data on officially designated protected areas are regularly compiled and there is international acceptance of the use of the indicator at the global, regional and national scales.

The new EU biodiversity strategy for 2030 contains specific commitments and actions to be delivered by 2030, including establishing a larger EU-wide network of protected areas on land and at sea, building upon existing Natura 2000 areas, with strict protection for areas of very high biodiversity and climate value.

The key commitments for nature protection in the EU biodiversity strategy for 2030 are:

2. Strictly protect at least a third of the EU’s protected areas, including all remaining EU primary and old-growth forests.

At global level, conservation of protected areas has been a part of the Strategic Plan for Biodiversity 2011-2020, including Aichi Biodiversity Target 11.

The aim of Aichi Biodiversity Target 11 is 'that, by 2020, at least 17 per cent of terrestrial and inland water, and 10 per cent of coastal and marine areas especially areas of particular importance for biodiversity and ecosystem services, are conserved through effectively and equitably managed, ecologically representative and well connected systems of protected areas and other effective area-based conservation measures, and integrated into the wider landscapes and seascapes'.

Main disadvantages of the indicator

The indicator does not describe the quality of management or whether or not the areas are protected from incompatible uses. The indicator needs to be complemented by information on management effectiveness or other elements that would indicate the potential of the designated area to protect biodiversity.